Our Lady of Piat is now a Minor Basilica after it was consecrated almost twenty years ago on 22 June 1999 by Vatican representatives. 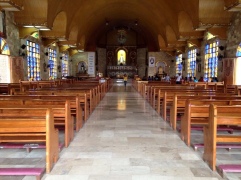 Formally known as Nuestra Señora de Piat, Our Lady of Piat is one of the most worshipped miraculous Marian images in the world. It is considered the “Mother of Cagayan Province.”
The Shrine of the Black Virgin Mary which Our Lady of Piat is also known was chiseled and sculpted in then Portuguese-occupied Macau upon the order of Dominican missionaries in the 17th century.
In 1604, the Dominican missionaries initially brought the image to the City of Nueva Segovia—now Lal-lo in Cagayan Province—which was then the seat of Diocese of Nueva Segovia.
Eighteen years thereafter, in 1622, the image was brought to Sto Domingo church in Piat.
In the interim, a move by Fr. Juan de Sta. Ana to replace the image with a better version drew flak from religious devotees. Moreover, a dispute arose between the people of Tuao and Piat as to where the permanent sanctuary for the Marian image should be built.
Thus, the present sanctuary of the image was permanently constructed on top of the hill in Piat in the 1700s.

Dubbed the “Pilgrimage Center of the North,” Our Lady of Piat has become a well-known and popular destination for oblates because of its supernaturally positive outcome since the Marian image’s deliverance in the province in the 17th century.
The holy building in the quaint Municipality of Piat is about 30 minutes away from the City of Tuguegarao in the Province of Cagayan and about 540 kilometers from Manila.